A while ago I run into a rather interesting and insidious bug, which I thought I would share.

We had a desktop application developed on the .NET Framework 2.0 using Windows Forms. Part of the requirements for this application was that the standard Windows controls had to be modified to have a custom appearance, to suite the customer’s needs. Since classes that are part of Windows Forms are really nothing more than thin

managed wrappers around Windows’ graphic subsystem GDI, many customizations that required  the use of functions not directly exposed through .NET, forced us to invoke the Win32 API directly.

Now, for someone who has been developing on a virtual machine for a long time (whether it be the CLR or Java), commodities like garbage collection are quickly taken for granted. And when the time comes to step out of the safe and cozy managed world, it is easy to forget that those assumptions are no longer valid. And that’s where problems usually start.

As a side note, if we were to build the same application today we would definitely choose Windows Presentation Foundation (WPF) over Windows Forms as UI technology,  since WPF allows to easily define the controls’ visual layout separately from their functionality without leaving the CLR.

Back to our case. Our Windows Forms application would run fine under normal operations, for about 3 hours until it suddenly crashed reporting a System.OutOfMemoryException (OOM). We also noticed that the application would survive for a shorter period of time if it was used more “intensively” (meaning opening and closing a lot of forms).

By looking at the log files we could determine that the exception was always originated from the constructor of a **Bitmap **object, which lead us to think that we were looking at a memory leak of some sort of unmanaged graphic resources. Like everything else in the System.Drawing and System.Windows.Forms namespaces, also the Bitmap class holds a reference to a corresponding GDI object, which is a resource allocated outside of the CLR and as such it must explicitly be released when no longer in use. Oddly enough, a through examination of the source code confirmed that all bitmap objects were correctly released from memory by calling the Dispose method on them. So what was leaking?

To further investigate exactly what was being used and left hanging around, we used a free tool called GDIUsage, which shows exactly how many and which kinds of GDI objects are being allocated by an application. On the left picture you can see how memory looked like at application startup compared to after a couple of minutes of normal usage. 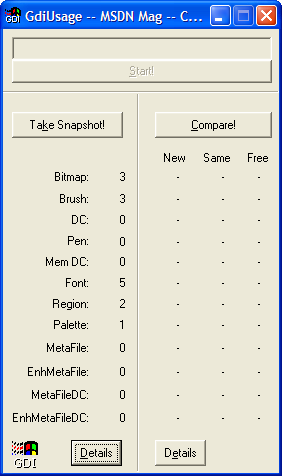 It was apparent that we were creating an awful lot of font objects and forgetting to delete them! But why would it take a long time for the application to crash? Were we hitting some kind of threshold?

It turned out Windows puts a limit on the number of total GDI objects that can be created inside of a process. And that limit is exactly of 10.000 GDI objects in Windows XP. This means that allocating GDI object number 10.001 will always cause an error. You can use Task Manager to see how many GDI resources each process has currently allocated by selecting the GDI Objects column. 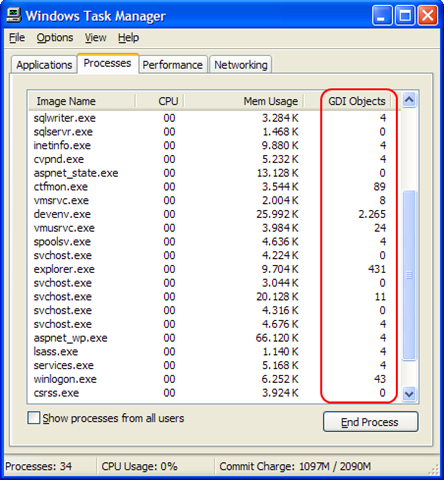 At this point it was a matter of tracking down where in the source code we were creating System.Drawing.Font objects. Considering the rate of growth of these fonts instinct suggested it ought to be in some kind of global function that was being called from different places in the application. Here is what we found:

Sure enough the MeauseString method was being called from all over the application (don’t ask why). Do you notice anything particularly odd in the code? Let me show you the offending line:

And here is how we fixed it:

As you can see we made sure the DeleteObject Win32 function is called to release the Font object created by the Font.ToHFont() method.

So, what did we learn from this experience? We can summarize it in 3 rules of thumb when dealing with unmanaged code in .NET, whether it be Win32, COM, you name it:

I hope this rules will help you avoid some of the most common pitfalls leading to memory leaks in your own applications.